It’s 2017 and we seem to have wandered into an era of fake news, alternative facts, and post-truth.

Half-truths and outright lies were a dominant theme of the 2016 U.S. presidential election,1 and yet the person primarily responsible for the phenomenon was elected by American voters.2 Also in 2016, the United Kingdom voted for Brexit after a campaign that featured a wide array of invented “facts”.3 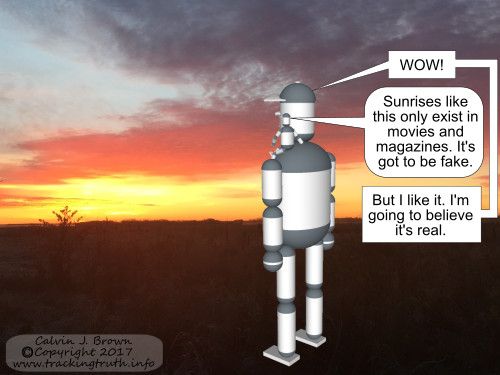 What’s going on? Has the western world lost interest in whether politicians make factual pronouncements? As I recall, politicians have rarely scored high in polls about trustworthiness. Maybe now many voters have even stopped caring when they hear lies. As another possibility, maybe they’ve lost the ability to recognize fiction when they hear it.

Of course, the phenomenon might not just apply to western politics. In recent years, we’ve been exposed too many times to the grizzly impact of radical-Islamic suicide bombers. These were people willing to give their lives for a cause in which they believed deeply. Some of them apparently became martyrs in the belief that, as a reward, 72 virgins awaited them in paradise.4 And let’s not forget that there are Christian fundamentalists who continue to deny that evolution is what led to the existence of humans, and that creationism (of the kind wherein humans suddenly appeared a few thousand years ago) is the correct explanation for how we came to exist.5,6

My initial reaction to phenomena like these is complete amazement. How can people believe such wild ideas? Why don’t they recognize nonsense when they hear it? Then I’m reminded of how completely pervasive dubious information and people willing to believe it are in the world. Apparently, there are people who buy the tabloids at the supermarket checkout and who really believe the headlines about two-headed aliens. There are people who truly believe their daily horoscope. There are professional athletes who hold superstitions about things like socks and shorts helping them succeed.7 Crazy ideas seem to be everywhere, and people who believe the ideas are just as prevalent.

Then in my most introspective moments, I ask myself: What makes me so confident that they’re the mistaken ones? How do I know that their ideas are completely goofy and mine are solidly factual? Why am I so convinced that evolution occurred, that a sex-filled, post-death paradise doesn’t await those who qualify, and that Donald Trump flagrantly disregards the facts when he speaks? I consider myself a fairly—actually I consider myself an extremely—rational and analytical person. I like to think that I can readily detect most of the really silly pieces of information as well as a good percentage of those only slightly suspicious. But can I really? How do I actually determine what's true and what's not? What mechanisms am I using? Are they good ones? Are they reliable? Can they be improved? Is it possible to find and articulate a method by which anyone can recognize the truth when they encounter it in their daily lives?

If you think you know the answer, you might be much more knowledgeable than I am—or you might be delusional. If you think the Scientific Method is the answer, ask yourself how often you apply that on a daily basis. If you declare that evidence-based reasoning is really what it’s all about, take a closer look at the volume and quality of actual evidence you consider as you absorb huge quantities of information each day. If you’re confident that your deep faith (whether in a deity or your innate critical-thinking skills) will always guide you to the truth throughout your day, try honestly to list the times that it did not and objectively begin to wonder why.

Don’t misunderstand me. I still believe I’m extremely rational and a fairly skilled detector of BS. What I’m interested in understanding is whether that belief, itself, is rational. I’m interested in understanding the fundamental aspects of how it’s possible to discern what’s actually true. Armed with that information, maybe I’ll be able to justify my self-confidence, or maybe I’ll have to adjust both my opinion and my detection techniques. As an interesting bonus, maybe I’ll learn how to articulate a practical process with which others can also filter the nonsense from their own daily information flow.

Toward that end, this blog will be about trying to identify and understand truth in our daily lives and, along the way, trying to answer a number of questions: Why do some people strongly believe strange things? Why can’t people agree what’s true? How do people establish their beliefs? How do people search for the truth? What are beliefs? What is truth? How could people improve their ability to find the truth?

If we’re to truly understand what’s driving the fake-news, alternative-facts, post-truth phenomenon, if we hope to have a chance to move the world toward greater recognition of truth, a good place to start might be beyond the easy, headshaking critiques of someone’s latest outrageous pronouncements. The solution might be to take a deeper look at society’s relationship with truth, and how everyone might be somewhat complicit in its dissolution.

I hope you’ll take the time to follow along. We might all become a little bit wiser.