What is a Belief?

"Alternative facts" became a controversial phrase on 22 January 2017 (just yesterday, as I’m writing the first draft of this) when it was uttered by a White House representative talking about inauguration crowd sizes.1 It provides an interesting backdrop for writing about another important concept. 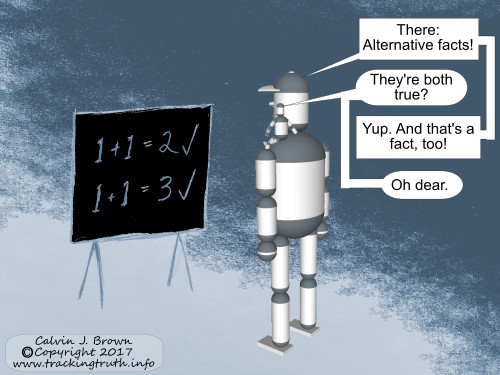 Two weeks ago, I wrote about the importance of establishing some basic terminology and started by providing a definition of truth.2 I’ll consider a statement to be true if it refers to something in the present or in the past (i.e. not the future), and the statement is consistent with reality (i.e. what actually happens, happened, exists or existed). “It rained yesterday” can be true if it actually happened. “It will rain tomorrow” cannot be true because it’s about the future. “The pizza tasted great” cannot be declared as true because it’s an opinion and not an assertion about objective (i.e. opinion-free) reality. On the other hand, “I think that the pizza tasted great” can certainly be true because it can be a real reflection of the current state of one’s thoughts.

There’s a related concept that deserves attention as well: belief. Here are a couple of definitions:


You might see from these that belief can be a broader, less stringent concept than truth. Belief can include opinions:


are expressions of someone’s opinion. They’re examples of beliefs, but they’re not eligible to be true statements.


are beliefs as well. However, these ones are also potentially true statements.

My intention is to use the terms that way. Belief and believe will be used as broader terms to capture the notion of something being held as an opinion, however strongly. You can hold and declare any beliefs that you like:


These are statements that are all eligible to be true, if they can be shown to align with reality (good luck with that). All of them can also be beliefs, in this case regardless of reality. Beliefs don’t have to be true—they just have to be believed. Truth and true will be held to a much higher standard. They’re not intended to be used to describe statements about things that cannot be (or could never have been) objectively verified as existing (or having existed) or happening (or having happened).

“Fascinating, Cal, but so what?”

Yes, I heard you thinking that. Well, I might not have heard the “fascinating” part but, nonetheless, so what?

Here’s the challenge: As we head further into discussions about finding the truth, it’s important to understand the distinction so we can make meaningful statements without confusing each other. For example, it’s easy to find beliefs—just ask anyone what they thought of the game last night or what the weather forecast is for tomorrow. Done. Finding the truth can be much harder. You could say “The deepest part of all the oceans is the Mariana Trench” and I could accept that both as your belief and as a potentially true statement. Whether it’s actually true could be a much tougher assignment, but at least I know that it’s the type of statement that could be. You could say “The sky is blue and gorgeous today,” and we could legitimately discuss whether “the sky is blue” is a true statement, but we could quickly dispense with “the sky is gorgeous” as your belief—a mere expression of your opinion. (Upon re-reading this, that sounds harsh—that your opinions aren’t important. Oh well, if you think that’s what I believe, that’s merely your opinion.)

And with that, we can avoid debating statements that simply express beliefs, and thereby agree on what we’re actually chasing as we continue exploring how to find the truth.

Back to "alternative facts." The idea of a fact, as it will be used throughout this blog, is that it’s a true statement. “Fire produces heat” is a fact and a true statement. “The moon revolves around Earth” is another. "Alternative facts" seems to have been used to mean a kind of alternate truth about the inauguration crowd sizes. This starts to feel like the notion that there’s no single, objective truth about a situation and, instead, that we can pick our own. That opens an interesting philosophical debate, but not one that helps the discussion right now. Maybe we’ll try that can of worms sometime in the future. The notion of alternative or competing facts about a situation makes no logical sense. It could be acceptable if two facts were asserted but didn’t compete with each other. For example, someone could say “the sky is orange” and someone else could say “the sky is blue”. Both could be factual if the speakers are looking at the sky in different circumstances. Otherwise, alternative or competing facts only makes sense if they were never both facts (i.e. true statements) to begin with. Rather, they were different beliefs. Multiple beliefs (i.e. opinions) can probably be held about any situation.

For our purposes, truth (and facts) will be deemed to be absolute and objective, albeit often hard to pin down.

A better phrase for the U.S. President’s representative to use would have been "alternative beliefs."