Wondering in the Dark

A few times each year, I see something that’s not there. That might mean I occasionally hallucinate, but perhaps not. My reason for considering this is that, to get at the root of understanding our beliefs, I think it’s useful to begin by carefully considering some personal experiences. 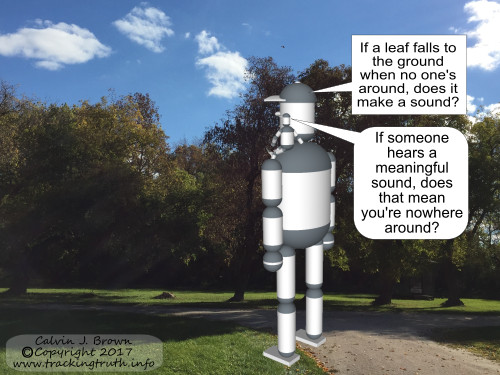 My wife, Jane, and I live in the country. Every evening, late enough that it’s usually dark outside, I take our dog, Reilly, out for his last walk of the day. Usually these are short and quite uneventful. However, occasionally Reilly dashes off into the dark after some unseen intruder. I usually assume his quarry is white-tailed deer, even though my first concern is that it might be a skunk. I’m rarely certain which it is because my night vision isn’t sufficiently acute. I’m more certain that something is there, because I’ve learned to trust Reilly’s ability to detect invisible visitors.

What I do occasionally see during these walks, as I look across an open field to the southwest of our property, is a cluster of lights in the middle of a farmer’s field. If that doesn’t seem unusual, consider that those lights aren’t usually there. More unusual is that, if the conditions are just right (and this only happens every few years), I can actually see enough detail to recognize vehicle headlights driving through a brightly lit intersection—out in the middle of the field. However, I’m quite certain these lights and vehicles aren’t actually out there. Given where I see the lights (and my certainty that there isn’t a road and intersection there), I’ve concluded that it’s an image of the lights and activity that are actually about 31 kilometres (19 miles) away and well over the horizon. The scene is a mirage.

Mirages are interesting phenomena involving some rare meteorological circumstances and a bit of physics. However, discussing the physical aspects of them isn’t my goal here. Rather, they provide an interesting point (for me at least) on our road to understanding truth.

Consider my two examples. What justification do I have to believe that Reilly is chasing anything other than darkness? I suspect the answer involves elements of trust (in my dog’s acute vision, sense of smell, and sanity) and hope (that it’s not a skunk). How can I be sure that I’m not seeing light-emitting objects that have suddenly shown up in the field, only to be gone by daylight? In this case, the answer might revolve around the understanding I’ve developed about the way the physical world operates and the most probable explanation for the lights.

In trying to understand what causes us to believe things, consider a few other examples. How do you know that humans have walked on the moon? How do you know that your religious beliefs are true, and why are you so certain that those held by many others are not? How do you know that the sun will rise tomorrow? Why did you believe (or disbelieve) that Wikipedia article you read yesterday? Why do you believe your favourite politician is telling you the truth? Why do you believe that you can vividly recall memories from years ago? Why are you certain that a chair (like the one you’re probably sitting on) is solid? Whatever you believe about these issues, there are people who would disagree with you, even about the chair: Ask your local physicist about how much of that chair is solid matter and how much is empty space.

So what should we believe, and why? How can we know what’s true? They’re intriguing questions. They’re also questions that recent world events have suggested are important. Through this blog, I hope to take you on a thought-provoking journey through ideas from advertizing, the law, psychology, neuroscience, philosophy, religion, everyday life, and elsewhere. Along the way, we might encounter some ideas you’ve considered before and others that might surprise you. An important part of increasing our understanding, and perhaps even changing our opinions, will be to ask fundamental questions about the nature of our beliefs.

In the meantime, I’ll hang onto my assumptions that my dog has been chasing deer at night and that an intersection doesn’t sometimes magically materialize in our neighbour’s field.