Did the Mississippi state legislature remove fractions and decimal points from the mathematics curriculum of public secondary schools? Was the horse in the Mister Ed 60’s TV show actually a horse? Do lemmings commit mass suicide, as originally shown in a 1958 Disney documentary?

I’ll come back to these pressing questions later. 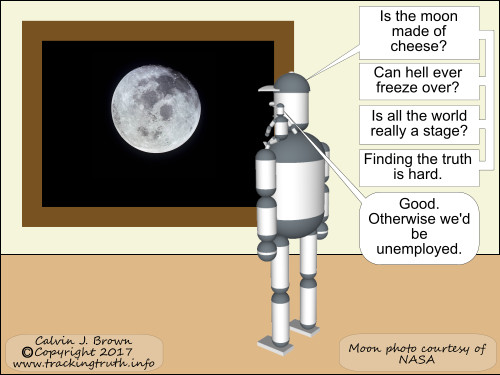 As this blog progresses, I intend to cover a wide range of topics related to truth. Some of them might take us into subjects most have us haven’t thought much about before. Many of them might be exploring common subjects a bit more thoughtfully that usual. My hope is that all of them will be interesting and useful. Before wandering too far around that body of truth-related subjects, I’d like to discuss one that’s right at the heart of the matter, and that we should all be able to readily relate to: finding truth in a digital world.

For many people (and I presume that includes you since you’re reading this), a significant amount of the information we consume in our daily lives comes from the digital world. The TV we watch, the radio we listen to, the online news we read, the Tweets we browse, the Reddit posts we peruse, the email we scan, the Facebook news feed we keep up with—all are directly providing or depending on information from digital (i.e. modern electronic) sources.

Try to imagine life twenty thousand years ago: If your food supply was getting low, you went hunting for berries or game; if you were cold, you built a fire; if a stranger tried to steal your supplies, you chased him off with your club; if you didn’t have any of the necessary skills, your parents taught you. Your information and your decisions were probably quite dependent on what you were experiencing directly and on the people in your immediate surroundings.

Now imagine life a thousand years ago. Where did people get their daily information? Much of it was probably still from their direct, personal experiences: If dark clouds were overhead and you were getting wet—it was raining; if you could see dark clouds moving toward you, it was likely going to rain soon; if no one was buying the wool from your sheep, the economy was depressed; if someone was shooting arrows at you, you were being attacked. However, more of the information likely came to you indirectly and from a distance as well: A pair of migrant workers came through your town and said the sheep in the next county were dying of some mysterious illness; the king’s representative rode into town and posted new taxation laws in the town square.

Now think about today. Of course, we still acquire information from our direct, personal experiences. But how much do we now get from others. The massive volume of information we’re exposed to on a daily basis is huge (unless, of course, you’re off the grid on a vacation in Antarctica). But that’s not all that’s fundamentally changed. The information that we get is much more easily and anonymously manufactured and distributed. Over time, the balance of information we get from direct, personal experience and what we get from others about world affairs seems to have shifted dramatically toward the latter. Today we’re exposed to much more information about the world, and it doesn’t come to us from physical people moving at human-walking or horse-trotting speeds. Today’s information comes from anybody, anywhere and arrives at the speed of the Internet. We might hear of a banana crop failure in Latin America minutes after it’s forecast as a possibility. We might acquire a skill by watching an online video. We get our weather forecast from the TV, websites, and smartphone apps. We hear of the demise of a world leader as soon as anyone with a communication device learns about it.

The world used to be (or at least feel like) a simpler place, and it used to be possible to know or reasonably deduce who (oops: whom) the information was from. Perhaps, as a result, you were afforded a better (or at least much different) opportunity for assessing its validity. Today, the world seems much more complex, and knowing the source of information and assessing its truth is much harder. As you skim your favourite news feed in the upcoming days, it might be worth wondering which stories you should actually believe, and explicitly thinking about how you’re making those decisions.

As to the questions I posed at the beginning, according to Snopes.com (which some of you might have discovered by immorally—OK, maybe alertly—looking ahead at the final reference list):


[4 April 2017: The day after I posted this article on 3 April 2017, a friend pointed me to an article, also in Snopes.com, that indicates that they perpetrated a hoax with some of the very articles I relied on them for.4 There's a serious lesson to be learned here. I'm still researching and absorbing the information. More on the results next week.]

Much more information about a much more complex world makes truthfulness much harder to assess—that’s our modern challenge. How can we begin to know which parts of our modern stream of information are true? That’s worthy of further thought. More on that next time.