If we wanted to conduct a thorough survey of ideas regarding truth and the search for it, where should we look? Probably lots of places, but one comes to mind because, in some sense, it’s a system designed to discover and deal with the truth. It might be both interesting and useful to consider truth from the perspective of the legal system. 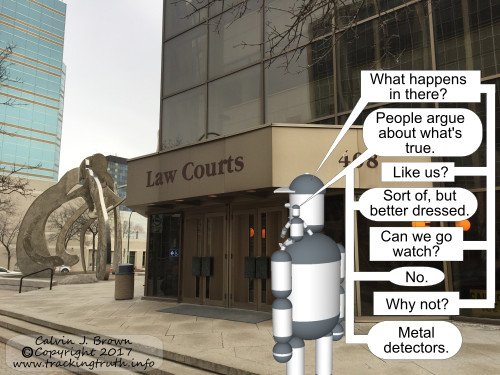 Before I begin, I have to acknowledge that legal systems vary greatly around the world. Standard practice here in Canada is not the same as that in the United States and also differs from the legal system to be found, for example, in France. One interesting place to get a sense of the diversity is The World Factbook published by the CIA.1 Yes, it’s published by that CIA. Shouldn’t I be suspicious of anything it produces? Yes, I should, and I promise that I will be. However, in this case, it’s rather convenient that the CIA maintains an online encyclopedia full of information, and my intent in using it isn’t to make any extraordinarily important decisions. Some might even suggest that I could save a few keystrokes by simply talking into my smartphone to request the info—and that they (or their friends at the NSA) would probably be listening. [Insert emoji here with expression of sad resignation.] But that's enough paranoia—something possibly deserving a future discussion.

In the Factbook’s listing of legal systems used by various countries, a quick scan shows the use of “US common law”, “French civil law”, “Dutch civil code”, “English common law”, “Islamic law”, “Buddhist religious law”, and many more. There’s even information about the legal system in Antarctica. Clearly, I’m not going to embark on a discussion that covers such diversity. Instead, I’m going to limp along with information gleaned from a few written sources, a lifetime spent watching too many courtroom TV shows (in the hope that Perry Mason represents real life), and my vast experience with the Canadian legal system. [I think a winking emoji deserved to be inserted after “vast experience”.] All you under-sixties might have to consult Google for help with the Perry Mason reference.

So, where does truth actually fit into legal systems? One might think that discovering the truth is fundamental to determining guilt or innocence. Recall the oath that seems to be repeated so often in TV courtrooms: “tell the truth, the whole truth, and nothing but the truth.” Sounds promising. However, without entirely abandoning the notion that the legal system is completely committed to the truth, we should probably realize that the idea might be a bit idealistic.

In Canada, as in many places in the world, criminal trials are designed to be adversarial. One side, typically on behalf of the government, is represented by a lawyer intent on proving the accused to be guilty. The accused person is represented by a defence lawyer whose job is to prove his or her innocence. In this system, it’s the responsibility of the lawyers to research, organize, and present the case for their sides. The judge’s role is to conduct the proceedings, and either the judge or a jury decides the outcome. In the USA, at least as represented by TV, the basic process is very similar. However, elsewhere it can be different. For example, France uses an inquisitorial system.2 In that system, “the presiding judge is not a passive recipient of information. Rather, the presiding judge is primarily responsible for supervising the gathering of the evidence necessary to resolve the case. He or she actively steers the search for evidence and questions the witnesses, including the respondent or defendant. Attorneys play a more passive role, suggesting routes of inquiry for the presiding judge and following the judge's questioning with questioning of their own.”3

The intent of both adversarial and inquisitorial approaches, one hopes, is to find the truth and, based on that, guilt or innocence. However, that’s not necessarily the case, at least for participants in an adversarial system. In The Trial Lawyer’s Art,4 the author notes how “the best trial lawyers throw themselves into their characters. So ready are they to don the mask that they can fight tooth and nail… So committed are they to win that they give their all to the fray…” However, as he notes about one sample defence lawyer, he “loved the truth. But he deceived juries… he readily used his special knowledge to persuade jurors that black was white, the guilty innocent.”

Oops. However well intentioned we believe a trial system to be, we might need to keep in mind that the participants aren’t necessarily focused on finding the truth—they might just be focused on winning. Of course, Perry Mason was clearly an exception. Curiously though, as my keen memory assures me, he was faithfully committed to the truth and yet always seemed to win the trials. A nice gig, if you can get it.

Our reason for looking at the legal system is to help us uncover useful techniques for finding the truth. We rely on the courts to administer justice, and we hope they base their decisions on an understanding of what truly happened. It seems like an environment potentially rich in ideas we could use. Our challenge will be to peek inside the system, to identify the techniques, and then to find ways to apply them to our everyday lives.