My last few articles proved to be a bit of a ride on the road to providing a few examples of phony Internet “facts.” I think it certainly accomplished what I intended, although in a way that was completely unintended.1 Having finished that bumpy journey relatively uninjured, let’s follow the topic a bit further. I suspect most people have encountered faulty Internet facts. Your own example might have arrived as a forwarded email from a friend, you might have seen it on your favourite information source (e.g. Reddit, Facebook, or Twitter), or you might have simply encountered it while browsing the Web. In any case, how can you know that what you read is true? 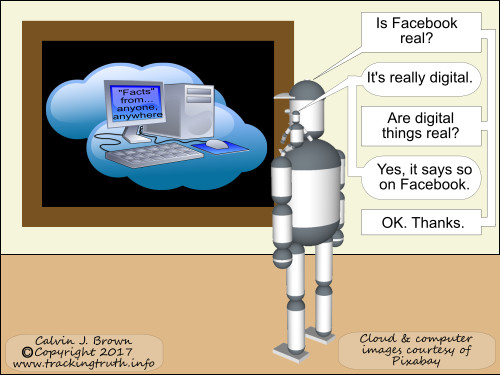 As we’re seeing, that’s actually a very big question, and I hope we’ll get better over time at fully answering it. For now, I’d like to extend one particular approach that proved central to this blog during the last couple of weeks: You could consider using a web service that helps you check facts.

Consider: A few months ago, I received an email containing an amusing story. It was about an attendant who collected parking fees at a lot outside England’s Bristol Zoo for 25 years. For all of those years, the zoo management believed the attendant worked for the city, and the city staff believed he worked for the zoo. One day, he failed to show up for work and, after some investigation, the officials discovered he worked for neither of them. A quick calculation estimated that he would have collected and kept about seven million dollars in fees over the years. It was assumed he had decided to retire and was living well in some distant, warm country.

When I read this, it gave me a good laugh. Having retired from my regular job a couple of years ago (to focus on writing), I was amused by (and possibly even a bit envious of) both the attendant’s ingenuity while working and his probable financial health in retirement. The story made enough of an impression on me that I might have even re-told it in conversation at a later time, except that I was slightly suspicious. A couple of days later, I decided to check on the story and, as you’ve probably guessed, discovered it was a hoax. It wasn’t even a new one: As I learned from Snopes.com, it was false and had been around for several years.2 (And yes, given the events of the past couple of weeks,3 I’ve since verified that it was false from other sources.4,5)

There are a number of questions this raised for me. Why did I initially believe it? Did I accept it as consistent with my knowledge of the world and it was, therefore (for me), perfectly plausible? Was I so impressed with the caper and its reward that I wanted it to be true and so chose to not doubt it? Then, sadly, there’s the lingering: If I was impressed with a criminal act, what does that say about my own moral character? (But in my defence, we are talking about seven million dollars!) Maybe I simply accepted the story because it had been presented to me (albeit via email) as a statement of fact? And also sadly, if this latter one is true, what does that say about my general ability to identify the truth?

Lots of questions to consider, all because of a single email making a claim about a distant stranger. For now, however, I’d just like to highlight the type of service that allowed me to get back on a fact-oriented track.

I used Snopes.com to find out if the claim was true. Prior to events of the past couple of weeks, Snopes.com (http://www.snopes.com/) tended to be my go-to service whenever I was wondering about something, but there are lots of others like it. Here are a few:


Perhaps fuelled by the recent U.S. election and the emergence of "fake news", "alternative facts", "post-truth", and "truthiness", there seems to have been an increased interest in web-based ways of validating information. Another interesting development is the emergence of real-time fact-checking. As an example, NPR (National Public Radio) in the U.S. provided near-real-time fact-checking of the first 2016 presidential debate. Their approach was to have a group of 30 newsroom staffers quickly checking and then annotating a transcript of what was being said.6 A different approach to real-time is that taken by extensions to Web browsers. The idea is that they monitor what you’re browsing (usually from particular sites) and offer information about its validity. Here are articles about a few:


In addition to the emergence (or at least our newfound awareness) of services like fact-checking websites, some major companies have committed to helping combat the problem. As reported by the New York Times on April 6th, “Facebook is launching a resource to help you spot false news and misleading information that spreads on its service … The new feature is part of a broader plan by Facebook to clamp down false news stories, which gained outsized attention in the months leading up to the 2016 U.S. presidential election.”7 On April 7th, CNBC reported that “Google launched a fact checking tool in its search and news results on Friday, as the technology giant looks to fight back against the spread of fake news, amid mounting pressure on internet firms to tackle such content.”8

Although I can’t attest to the effectiveness of these various services directly, it’s nonetheless encouraging to see such responses to the large and growing problem of nonsense on the Web. I’m hopeful the trend toward improved technological assistance in finding the truth continues. However, before declaring ourselves done for today, there’s an important question we need to ask ourselves: When someone or something flags information from the Web as being fake, why should we believe the flagger any more than the original source of information? And here’s another one: Since it’s not practical to use these tools to fact-check everything we encounter on the Internet, what other, more efficient ways are there for separating the junk from the jewels?

There’s certainly much more to consider.