Earlier, I introduced the notion of using the legal system as a potential source of techniques for finding the truth.1 From the perspective of formal interaction with the law courts, I seem to have led a distinctly uninteresting life. Consequently, I decided to supplement my experience. A few weeks ago, I wandered into the local law courts and spent several hours watching courtroom activity. Once I got through the security checks, I spent some time in several courtrooms that were open to the public. I didn’t manage to see high drama, but it was still a fascinating exercise. 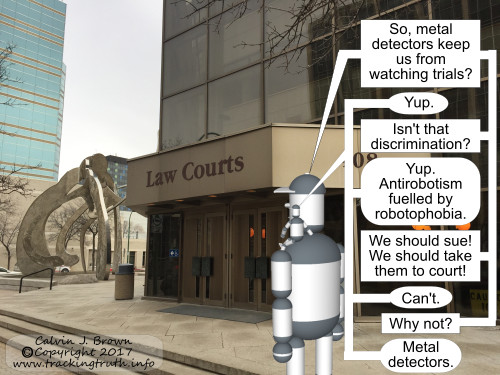 Something that was evident throughout was how controlled and structured the courtrooms were. Judges and, in some circumstances, lawyers wore black robes, and anyone official who wasn’t robed was in formal business attire. All participants presented their information and reasoning calmly and respectfully. Phrases like “my learned friend” were even used to refer to the opposing lawyer (without a hint of sarcasm). (Oh, and if, like me, you’ve never heard anyone use that word while talking about you, in situations like this it’s pronounced lur-nid.) Any comments or questions by the judge were accepted and handled almost gratefully by the lawyers. Lawyers bowed toward the judge (or perhaps that was toward the court) upon entering and leaving the courtroom. It was all very structured and controlled, and that seems to be noteworthy: Truth might be pursued more successfully in a respectful environment and in the absence of chaos and emotion.

Of course, central to court discussions is always the notion of evidence. Evidence is supposed to be at the heart of how a court decides the truth about guilt and innocence. Did Joe steal his neighbour’s outdoor garbage can? Evidence that it was found in Joe’s basement full of empty beer cans could help decide. Did Josie hit a golf ball through her neighbour’s window? Evidence that she was seen by a security camera breaking into the neighbour's house to retrieve the ball could help demonstrate that.

One type is the testimony of witnesses. Under normal circumstances, having someone testify who actually saw a crime being committed can provide quite strong evidence for deciding what actually happened. The testimony of the person accused of the crime can also be considered, if it’s provided.

For example, I’ve occasionally been accused of taking the last cookie from the jar in the kitchen. Yes, we actually have one—a replica of an old two-storey house we purchased in San Francisco many years ago. (Re-reading note: we bought the cookie jar, not the house.) Sadly, it’s not filled with cookies as often as I would like. I can almost hear the prosecution using that as possible motivation for my stealing the last cookie: “Honourable members of the jury, Mr. Brown has been known to work himself into a cookie-deprived frenzy when supplies are low…” In such a trial, someone might also testify to having seen me committing the crime. By the way, that evidence would never exist. I can be very stealthy when required. Of course, the notion of testifying against myself is absurd… unless a cookie was offered in payment (which hopefully would be entrapment or bribery or some heinous offence that would invalidate anything I said).

As another possibility, experts can provide testimony in their areas of expertise. In a trial, forensic experts can provide results from a multitude of tests (like TV’s CSI folks, although I suspect not quite as dramatic). Psychology experts might offer their views on, for example, the mental health of a defendant. I can imagine cases where firearms, accounting, or even weather experts could provide relevant testimony. In all cases, the idea is that it’s reasonable to take into account the analysis and opinions of people who possess special knowledge and have considered the particular situation.

In my riveting last-cookie example, one can imagine a CSI specialist providing a detailed description of the crumbs discovered as the result of careful analysis of my keyboard.

Physical evidence can also be presented at a trial. For a murder case, it might be a weapon found at the accused person’s home. For an embezzlement case, it might be a personal diary of how money was illicitly handled. For a last-cookie case, it might be… an empty cookie jar. You get the idea: To assist in finding the truth, it sometimes helps to personally see or examine an object that’s directly related.

In the trials I watched during my Law Courts excursion, I didn’t see many of these types of evidence being presented—the cases simply weren’t at that stage. However, there were other noteworthy techniques. One was that the opposing lawyers carefully presented their points of view to the judge. They cited established facts and tried to persuade the judge (or in one case, three judges) how those facts should be viewed to favour their side. As a general example, a gun used in a murder that was discovered in a defendant’s home could be evidence that the defendant is guilty, or it could be evidence that someone is framing him. Cookie crumbs in a keyboard could be from some past transgression and not the one currently being considered. In any case, using the evidence as a basis for considering multiple points of view is an important technique, both in trials and elsewhere.

There’s one more technique worthy of mention. One of the cases I watched was in the Court of Appeals. Its equivalent exists in many other jurisdictions. The point of such a court is to provide a mechanism for re-examining aspects of a case in which a judgement has already been rendered. It provides an opportunity to formally reconsider a case, and also provides a hint at another technique that could be important in our daily lives.

Fostering and using respectful environments, examining various kinds of evidence, considering opposing points of view, and revisiting previous conclusions are all techniques that are used in legal systems for establishing the truth and drawing conclusions. They also all provide food for thought in our quest for techniques we can personally employ in our daily lives. However, before we draw our own conclusions, we should consider how effective these techniques are.

That’s for next time.